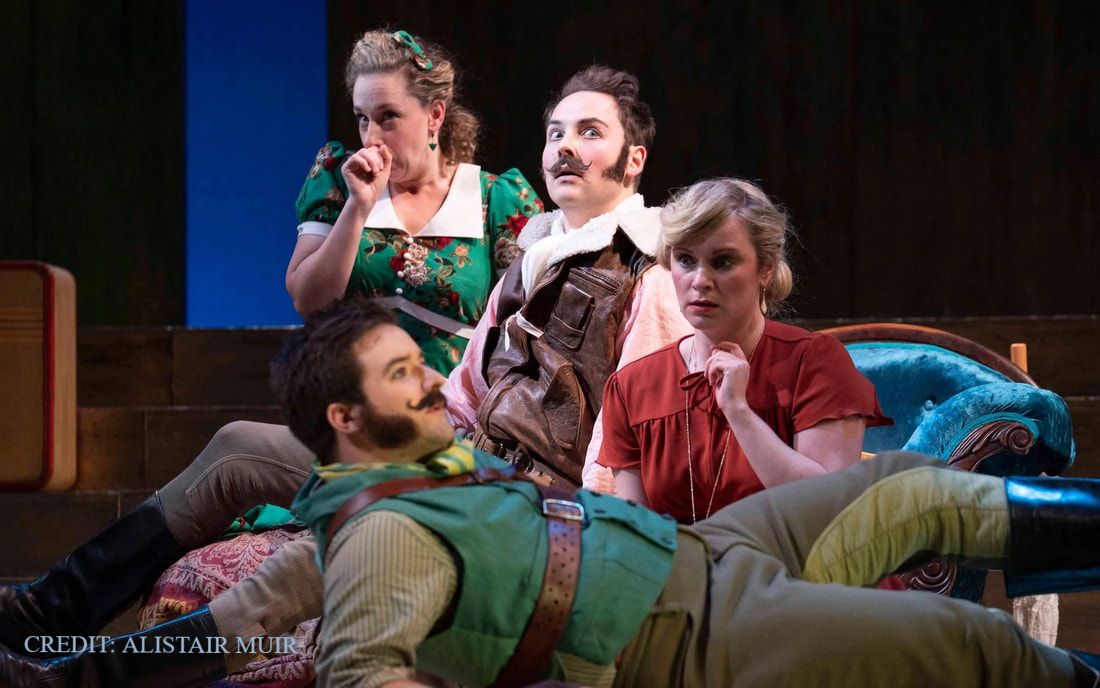 The bass-baritone Frederick Long caught that blend of youth and wisdom, every word so clear and vivid I felt as if I were really there, looking out at the calm sea, listening to the grating roar of pebbles flung by waves
Rebecca Franks, The Times
​
Frederick Long's diction and sound were impeccable, his understanding of the terrain complete; I look forward to hearing more from him
Colin Clarke, Seen and Heard International
​
Guglielmo, Cosi fan tutte : English Touring Opera

​ ...but it was Frederick Long’s strutting, Flashheart-style Guglielmo who dominated – natural comic timing paired with a lovely open, unforced tone making him the boy we all love to hate
Alexandra Coghlan, The Arts Desk

...charmingly sung...Jenny Stafford and Frederick Long are both naturally ebullient comedians, cheerfully enjoying the chance to overact as Despina and Guglielmo
Rupert Christiansen, The Telegraph

Frederick Long sang with a lovely fresh and relaxed tone as Guglielmo, dashing in his knee-boots and flying suit as he swept Dorabella to the clouds
Claire Seymour, Opera Today

​A performance of blazing conviction
​Tim Ashley, The Guardian

The Sorceress (a superb Frederick Long) is less a malign force than a dark alter ego
Alexandra Coghlan, The Spectator

The magic of the Sorceress is wild, frightening, even sadistic
Rebecca Franks, The Times
​
Frederick Long has a whale of a time camping it up as the Sorceress
Rupert Christiansen, The Telegraph

Long has a gorgeous voice and eschews affectation – this is one place where ‘stand and sing’ is most effective
​​​​Catriona Graham, The Opera Critic

Frederick Long as the haggard sorcerer Isménor was in commanding voice, and at moments his tensile bass was suggestive of Jochanaan in Strauss' Salome, and his terrifying powers of insight, placing him between the worlds of god and man, were beguilingly summoned in the dark hues of his lower register
Benjamin Poore, Bachtrack

​​There were outstanding performances by Frederick Long as Zebul, entirely focussed, forceful and convincing, completely subsuming the histrionics around him...
​​Robert Thicknesse, Opera Now


Papageno, The Magic Flute : Mid-Wales Opera
...the fine, unforced foolery of Frederick Long’s Papageno, a role as important here as are the Fools in Shakespeare, affirmations of the value of common humanity just as other aspects of the work laud idealism. I particularly loved the way in which Long contrived to be simultaneously moving and absurd in his ‘attempted suicide’ at the close of Act II
Glyn Pursglove, Seen and Heard International


Schaunard, La Bohème ​: Opera Holland Park
Frederick Long’s Schaunard was excellent – few will have heard so much of this character’s contribution to the start of the second Act
Alexander Campbell, Classical Source
​
Frederick Long and John Savournin made at least as much of Schaunard and Colline as any artists I can recall
Mark Berry, Opera Today