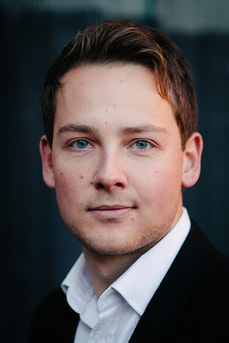 Frederick received a first-class degree in music from the University of Bristol, a DipRAM from the Royal Academy of Music, and furthered his training at the National Opera Studio. Noted for the musicality of his performances, alongside vivid stagecraft, he is establishing himself as one of Britain’s most exciting and versatile young bass-baritones.

Since making his debut at Glyndebourne as the Lackey Ariadne auf Naxos, he has gone on to work at all the major opera houses in the UK including ENO, WNO, Opera Holland Park, Opera North and the Royal Opera, performing and covering a diverse range of roles including Handel's Saul, Mozart's Figaro and Papageno, Schaunard (La bohème), Lieutenant Ratcliffe (Billy Budd) and Sam (Ballo in Maschera).

Equally at home in contemporary repertoire, he performed Medeiros The Yellow Sofa for Glyndebourne on Tour, Leporello Giovanni  for Silent Opera (a digital reimagining of the original), and covered Janitor in Tansy Davies’ Between Worlds for ENO. With Royal Academy Opera he created the role of Willi Graf in the world premiere of Peter Maxwell Davies’ Kommilitonen!.
​
Frederick's wide vocal range and rich timbre sees him in demand on the concert platform across the country and abroad. Already making his name as an exponent of the baroque masterworks of Bach and Handel, this year saw him take on two of the great romantic roles - Mendelssohn's Elijah and St Peter in Elgar's The Kingdom - as well as the Verdi Requiem with a chorus of two thousand at the Royal Albert Hall.

When escaping work, Frederick can be found amidst the cider presses of Somerset, happily pottering about with his wife Emily and young son Ralph.
Proudly powered by Weebly